When it comes to elite stadiums Tasmania has several that are right up there with the best of them. We take a look at them in our blog. There are also a number of other sporting facilities around the state that cater for domestic and state level competitions.

With some long distances to travel if you live in Hobart and want to attend an event in Launceston, and vice versa, you will need reliable transport. With a range of options for reliable group transportation in Tasmania, CoachHire can help you reach your destination safely and in comfort.

The University of Tasmania Stadium, also known as York Park and previously as Aurora Stadium, is in Launceston. It is predominantly used to host AFL games and is the home away from home venue for the Hawthorn Hawks who play several ‘at home’ games here each season. The Tasmanian Football Hall of Fame is located here too.

With seating for 21,000 the stadium is the largest by seating capacity in Tasmania. This makes a logical choice for other big ticket sporting fixtures such as cricket, bowling, cycling and tennis. It is also used for pop concerts and similar entertainment events.

For a sports stadium with a view you can’t go past the TCA Ground, or Tasmanian Cricket Association Ground in Hobart. From its elevated location sports fans attending fixtures at the venue can look out over the Derwent River. With its white picket boundary fence and expanse of green turf, the TCA Ground is also quaintly English. Until you notice the Australian native plants and trees that surround it.

The TCA Ground and Bellerive Oval (Blundstone Arena) are the only 2 first class cricket venues in Hobart. However, all 1st class games are now played at Bellerive Oval. Nevertheless, the venue still hosts local cricket and Australian Rules Football games. 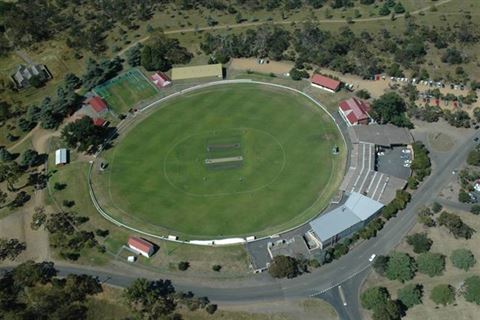 Blundstone Arena, or to use its more familiar name Bellerive Oval, is one of 2 first class cricket grounds in Hobart. It’s currently the home grounds of all the Tasmanian national and state level cricket teams. It can seat 20,000, making it the second largest stadium by capacity in Tasmania behind the University of Tasmania Stadium.

The venue was also developed as a first class Australian Rules Football venue and is North Melbourne’s second home ground. Additionally it is the home base for the Hobart Hurricanes.

The Domain Athletic Centre is a multi-purpose sporting facility and stadium in Hobart. It has a range of track and field amenities and hosts the Tasmanian leg of the Australian Athletics Tour.

The interior arena can also be used for football games. It regularly hosts Football Federation Tasmania league games as well as interschool games.

The Silverdome was built in 1984 and at the time was Australia’s first indoor velodrome. The multi-purpose sporting and entertainment facility and stadium is in Launceston.

Despite being built for cycling, the facility is designed in such a way that it can be used for a range of other activities. It’s a popular entertainment venue for concerts as well as non-cycling sports like netball. The Suncorp Super Netball league team the Collingwood Magpies currently play at least one ‘home’ game here every season.

These are a few of the major stadiums in Tasmania that cater for some of the elite sports that are played here. Some of them also do double duty as premier entertainment venues.

When attending either sporting or entertainment events at any of these stadiums, or at any venues throughout Tasmania why not consider coachhire’s low cost mini bus hire in Tasmania. Our friendly, helpful team is always available to assist you in making your travel arrangements.