After the 2000 Sydney Olympic Games, Sydney had a group of new stadiums. Today those stadiums in Sydney are used to host a range of sporting fixtures such as cricket, rugby league, rugby union, football (soccer), and Australian Rules Football. Check out some of the interesting information about them in our blog.

If your team happens to be playing at one of these fixtures, avoid the parking hassle and hire a coach to get an entire group there. Our reliable group transportation in Sydney offers a range of coaches to suit various sized groups.

The Sydney Cricket Grounds, despite its name, is a multi-sporting complex. It hosts all types of cricket – Test, One Day, Twenty20 as well as domestic games. The other sports played here are Australian Rules Football and both codes of rugby.

Currently the stadium is the home ground for both the Sydney Swans AFL team and the NSW Blues Cricket team. It has a seating capacity of 48,000 and is the 8th largest sporting venue by capacity in Australia.

Stadium Australia is the main stadium in the Sydney Olympic Park complex, built to host the 2000 Sydney Olympic Games. Commercially the venue has had several names; currently it’s ANZ Stadium and previously it was Telstra Stadium. It’s a multi-sporting complex that hosts both codes of rugby, AFL, football (soccer) and cricket.

It originally could seat over 110,000 people, making it the biggest stadium by capacity in the country but expansions to the playing surface in 2003 to accommodate more sports reduced that capacity to 83,500. Even so, it’s still the second biggest. And the only stadium in the world designed to play 5 sports.

Stadium Australia is currently home to a number of teams including the South Sydney Rabbitohs and the NSW State Rugby team. 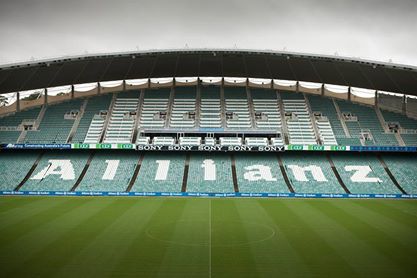 Spotless Stadium is another one of the Sydney Olympic Park complex. It was used for the baseball events during the 2000 Olympics. The Royal Agricultural Society of NSW operates it under lease from the state government.

With a seating capacity of 24,000 the venue is used for a range of sports and events, including the Sydney Royal Easter Show. Currently it’s the home venue for the Greater Western Sydney Giants

North Sydney Oval is the second home ground for the NSW Blues State Cricket Team. It’s run by the North Sydney Council and has been operating since 1867.

The venue is used for several sports on top of cricket, including rugby league and rugby union. It has also been used for football (soccer). It can hold 20,000 people.

Are you considering getting a group together and supporting your team at their next home game fixture? Then why not consider contacting Coach Hire’s friendly team about low cost mini bus hire in Sydney.