The schools and universities in Perth are a popular choice with overseas students and for good reason. When one thinks of an ideal place to study things like a great climate, clean air, plenty of wide open spaces, close to rivers, beaches, good infrastructure and excellent quality of life all spring to mind. Combined of course with world-class educational facilities and successful career pathways, a few of which we explore in our blog.

These are all attributes that go into determining what makes a city an ‘education city’. And one city that meets all these requirements is Perth, which is probably why it’s been dubbed Australia’s ‘Education City’.

Perth however is a sprawling city in a state that occupies one-third of the Australian mainland. Therefore, students attending field trips or travelling to some of the more remote campuses are going to require reliable group transportation in Perth. Contact CoachHire for more information about our fleet of coaches and mini buses available for hire.

The main campus of the University of Western Australia (UWA) is set on 65 hectares of beautifully landscaped gardens in Crawley on the banks of the Swan River. With its iconic colonial limestone buildings like Winthrop Hall, the Crawley campus is recognised universally as one of the most beautiful anywhere in the world.

UWA is a member of the Group of Eight and a public research university. It was established in 1911 so is one of the youngest of this group of universities. Nevertheless, it is still the 6th oldest in Australia. For many years, right up until 1973 when Murdoch University opened its doors, it was also the only university in the state.

UWA is somewhat unique amongst Australian universities in that it prefers to remain a single campus institution. Its many external training facilities, like the one in Albany, are instead referred to as ‘training centres’ rather than campuses. 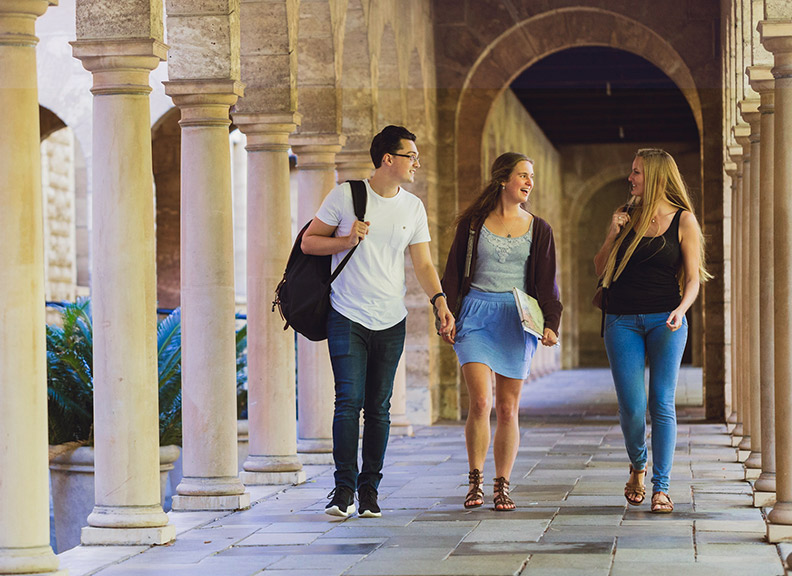 Murdoch University is WA’s second oldest university. It was established in 1973 with a campus in Bull Creek designed to house a major veterinary school. The Murdoch School of Veterinary Science produces some of the country’s leading vets and is widely acknowledged as one of the best vet schools anywhere in the world. The school is particularly well regarded for its equine vets and has a major equine hospital on site that provides students with valuable hands on experience in equine veterinary medicine.

Today Murdoch also has Perth campuses in Rockingham and Peel as well as Dubai and Singapore. It is a member of the Innovative Research Universities. Murdoch pioneered the holistic admissions policy of accepting students based on eligibility factors other than pure academic results. Other tertiary institutions elsewhere have since adopted similar admissions policies.

Curtin University is the former Western Australian Institute of Technology, which was granted university status in 1986. The main campus is located in Bentley; there is a second campus in the Perth CBD and overseas campuses in Dubai, Singapore, Malaysia and Mauritius. Further to these campuses Curtin has connections with exchange universities in around 20 countries.

With 5 faculties and nearly 100 specialist centres, Curtin is the largest of WA’s universities by volume of enrolments. It is heavily involved in research activities, notably in the Resources and Energy fields (petroleum and gas). The university is a member of the Australian Technology Network.

Edith Cowan University (ECU), Australia’s only university to be named in honour of a female, was established in 1991 from a merger of the various teachers colleges under the umbrella of the WA College of Advanced Education. The oldest of these colleges was the Claremont Teachers College, the state’s first tertiary institution established in 1902.

Today ECU has 2 main Perth campuses in Joondalup and Mt Lawley, and a regional campus in Bunbury. Many of its courses are also offered online and it has arrangements with overseas partners to run classes at those facilities. Amongst ECU’s most notable schools are the renowned Western Australian Academy of Performing Arts, the WA Screen Academy, and the School of Nursing and Midwifery.

Australia has 3 private universities. One of them is the Fremantle-based University of Notre Dame Australia. The other two are Bond University on the Gold Coast and Torrens University Australia in Adelaide. Notre Dame Australia was established in 1989 and is a Catholic university. It has a campus in Fremantle (main campus) and another in Broome. There is an interstate campus in Sydney and a number of clinical schools across Sydney, Melbourne, NSW and Victoria.

The university’s various degrees meet industry and professional standards but their medical degrees also factor in additional training around bioethics.

That wraps up our brief look at some of the schools / universities in Perth. Require low cost coach hire in Perth for group field trips? Our friendly Perth team is standing by to assist you with your coach hire arrangements.