There’s nothing like a bit of isolation to create a parochial attitude towards local teams and West Australians are famous for it! And there’s nothing like the support of a parochial crowd to spur a home team on either. Which often gives interstate teams / clubs in Perth, playing in Perth, a massive hometown advantage. It’s also a large part of the reason why Perth games present such a psychological hurdle for interstate teams.

Read on to find out who some of the top interstate teams and clubs in Perth are.

Whether you’re a parochial West Aussie wanting to barrack for your local team, or an interstate supporter who feels that your team needs all the support it can get in a Perth game, Coach Hire can help. Check our range of bus hire services in Perth and make sure you don’t miss that game.

The line up of ultra successful Western Australian sporting teams is long and includes greats like the state’s premier men’s hockey team, the SmokeFree WA Thundersticks. This team, along with the WA Diamonds (the women’s state hockey team), has dominated the National Hockey League/Australian Hockey League over the years and has also supplied many of the players on the Hockey Australia national teams.

The Thundersticks have been the NHL/AHL Champions a record 9 times, a feat unequalled by any other team in the competition. To add to their record, they’ve also finished runner up 7 times, 3rd once and 4th 4 times. In fact, in their entire playing history they’ve only finished out of the top 4 twice.

One of Australia’s greatest ever sports coaches Ric Charlesworth was also a dominant part of the WA hockey scene for many years, coaching the Australian Women’s team to Olympic and international success. Additionally, Perth is recognised as an important training centre for Australian Hockey. 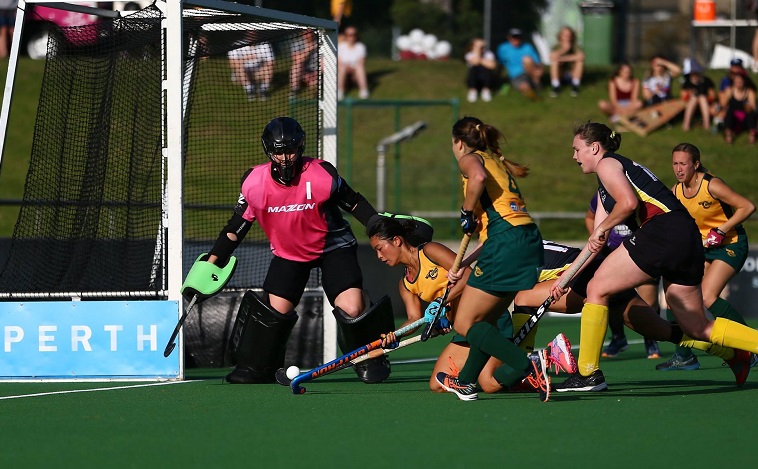 The Perth Wildcats are another of the interstate teams / clubs in Perth that have dominated their sport. This is the WA state team in the men’s National Basketball League. The Perth Lynx is the women’s NBL state team.

To say the Wildcats have a rather large, faithful following in Perth is probably an understatement! Wildcat’s home games invariably attract huge crowds and they’ve set a number of attendance records accordingly. In 2017 they became the first team in the NBL to reach 10,000 members.

Pundits believe this large parochial support base at their home games gives the team an almost unparalleled home court advantage and has undoubtedly contributed to their 8 NBL championships. Their closest rival is Melbourne United, who have 5 championships to their credit.

For some reason interstate teams and clubs in Perth like purple! It’s the team colours for a number of them, including WA’s A-League football (soccer) team and also the Fremantle Dockers AFL team.

Perth Glory is one of only 3 teams in the current A-League competition from the old National Soccer League. The team was formed back in 1995 and won 2 championships during the NSL days. Since joining the A-League in its inaugural 2005/06 season, Glory have won a further 3 league premierships.

Baseball team Perth Heat was founded in 1989 to play in the then Australian Baseball League. They were the second most successful team in the League during those early days with 2 wins and 3 runner up titles.

No list of interstate teams / clubs in Perth would be complete without the West Coast Eagles! The Eagles are one of 2 teams from WA that play in the Australian Football League competition. During the 1990’s they were dubbed the ‘team of the decade’ thanks to their strong on field game tactics which saw them raking up long winning streaks season after season.

Unfortunately though it didn’t translate into successful finals footy until 1991, when they became the first non-Victorian team to reach and play in a Grand Final. Unfortunately they were defeated that year but they bounced back with a vengeance in 1992 to go all the way to the top. In doing so, they also became the first non-Victorian team to win an AFL Grand Final.

West Coast have since won 2 further Grand Finals in 1994 and 2006 and at the time of writing are poised for a 4th victory in the 2018 Grand Final against Collingwood.

That wraps up our coverage of some the top interstate teams / clubs in Perth. Want to catch your team’s home games? Or travel east to support them in their away games? Coach Hire, with our range of first class coaches and minibuses can help.

When you’re ready to book your coach charter in Perth, then contact our friendly Perth team for more information.