Canberra – all the benefits of city living without the hassles and the stress. And one of those benefits is access to world-class education facilities on your doorstep. The schools / universities in Canberra are amongst the best in the world so you’re assured of quality training and a first rate degree at the end of it.

Canberra is also the location of Australia’s Defence Academy so if you have leanings towards a career in the Armed Services, Canberra is the place you want to be. We take a look at some of the other available options for schools / universities in Canberra in our blog.

Like most educational facilities, some courses in Canberra require students to undertake field and research trips. This generally requires the use of a coach or mini bus. If you’re looking for reliable group transportation in Canberra, CoachHire can help.

UC occupies a 120-hectare site in Bruce. The campus also houses the Australian Institute of Sport, a couple of government departments, a technology park, a hospital, and the campus of the Canberra Institute of Technology.

All up, the University of Canberra has 6 faculties with undergraduate and postgraduate courses in subjects such as Health, Art, Business, Government, Law, Education, Engineering and Applied Science plus others.

The Australian National University (ANU) was established by the Australian Parliament in 1946. The main campus is in Acton, where there are 7 research and teaching colleges along with several national institutes and academies.

The ANU was originally intended for postgraduate research students but started taking on undergraduates in 1960 with its incorporation of the Canberra University College. ANU is currently one of Australia’s top ranking universities by a number of different criteria.

The Australian Defence Force Academy (ADFA) provides Australia’s future defence force personnel with both military and academic training. The academic training is provided through the University of New South Wales at their Canberra campus, which is located at the ADFA. This ensures that military personnel are well-rounded professionals.

The ADFA is located at Campbell. It incorporates not just Australian Defence Force personnel but also the Defence Force Chaplain’s College, the Australian Federation Guard and the Capability Technology & Management College.

The Canberra Institute of Technology (CIT) is part of the TAFE system in NSW and the ACT. CIT provides vocational education training in a range of fields including Automotive, Art, Hairdressing, Construction, Management and Accounting, Community, Communications, Engineering, Electrical, Health, Science, Veterinary medicine and others.

Courses are offered as certificates, diplomas and advanced diplomas, graduate diplomas and bachelor degrees. They are recognised and accepted throughout the various industries.

CIT operates 3 campuses in Canberra and has learning centres at Gungahlin and Tuggeranong for students in distance learning courses. 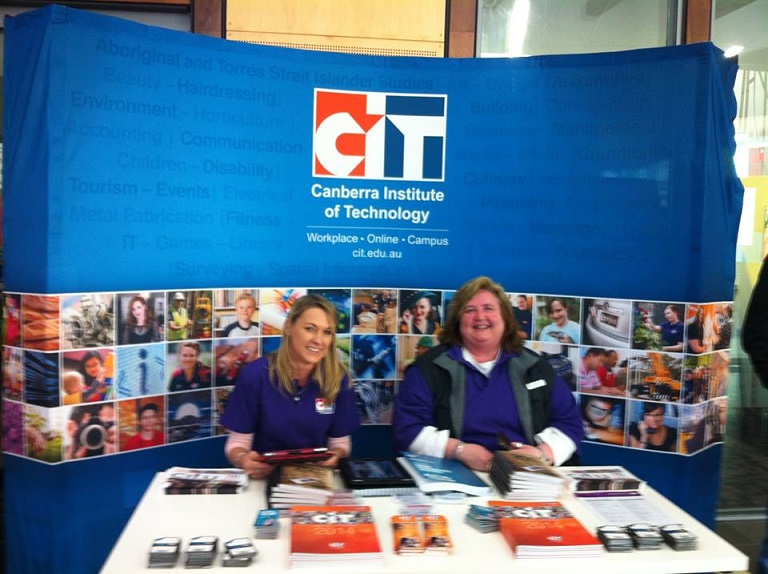 The Australian Catholic University’s (ACU) Canberra campus is situated in Watson. The ACU is a Catholic public university with campuses in all mainland East Coast capital cities as well as one in Ballarat and one in Rome.

The university is an amalgamation of 4 former Catholic tertiary colleges and was established in 1991. The Catholic institutions themselves though date back to the 1800’s when they were instrumental in training teachers and nurses for Catholic schools and hospitals.

Currently the ACU has 4 faculties covering Theology and Philosophy; Health Sciences; Education and Arts; and Law and Business.

When you require reliable group transport in and around the ACT, contact CoachHire for more information about our low cost coach hire in Canberra. Our fleet of coaches and mini-buses are suitable for any size group and are available as self-drives or with one of our experienced drivers. Contact us today for help with your group transportation arrangements.